Navien makes the NCB-240 combi-boiler based off of their tankless water heater. The Navien NCB-240 system is powerful, dependable, and strong enough to support all your homes heating and domestic hot water needs. I should know I use one for my homes heating and water.

The Navien NCB-240 uses a very similar design to that of NPE tankless water heater except that instead of heating the homes water in the primary and secondary heat exchangers like a tankless does, the NCB-240 transfers heat enegy via a small third heat exchanger to keep your potable water potable. 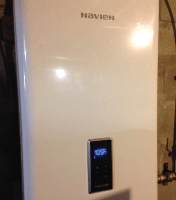 Basically within the NCB-240 is a small, but highly efficient heat exchanger that is able to transfer heat from your heating loop to your homes domestic hot water pipes. This is done with complete isolation so that glycol or water contamination is nearly impossible. Yes, this does work out to be a little less efficient than directly heating your homes water though the primary and secondary heat exchangers like a tankless would do but the difference is relatively negligible. See the chart below for hot water production loss between a Navien tankless and the Navien combi-boiler.

So it’s the middle of winter, what happens when the boiler is heating your home and someone starts the shower? The combi system will sense this double demand and shift the priority from home heating to hot water production seamlessly and nearly invisibly.  Really the only thing you might notices is if you used a forced air system you can hear the fan turn off and back on once the hot water demand has ceased.  The Navien NCB-240 easily runs our two showers, a tap, and the dishwasher at the same time in the middle of winter. On top of that, while hosting people at our house we are never worried about running out of hot water like we were when we had a conventional water heater.  This relief is actually surprisingly amazing 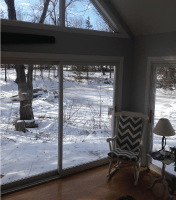 One of the greatest benefits of a Navien combi boiler is the fact they are so expandable and adaptable. If you are running a conventional forced air gas, oil, or propane furnace a combi-boiler with the addition of a simple heat exchanger and blower (air handler) can use your homes existing duct work. Want to add some radiant floor heating to your bathroom in a few years? Not a problem, the combi-boiler can run that as well. Need heat in a new spot but don’t have any room or way to run conventional ductwork, try a stylish antique rad. The Navien NCB-240 is a completely expandable system that will provide years of use for any home owner with future plans for renovations.

Our home has a large sunroom 30’x15′, in it are three forced air rads and four 10 foot patio doors.  These doors leak cold air like crazy during the winter months and because the termostat was located far from this location it was always too cold to enjoy.  After we installed the NCB-240 we ran an infloor heat loop through the joists under the sunroom and added a separate thermostat located in the room.  It’s now always incredibly comfortable and went from being one of our least used rooms to one of the most.

The combi-boiler from Navien is highly efficient at around 91-93 percent. So every dollar you spend on fuel at least 91 cents are actually being used for heat. This is a drastic departure from even just 10 or 20 years ago when furnace systems would send 30 to 40 cents out the exhaust pipe, completely wasted.

Space Savings – This system simply hangs on your wall, no need for a storage hot water tank. This simple change can save you a ton of room in your home. On top of that, depending on your application you may be able to completley remove your furnace system as well.

Chimney Removal – Before I moved to the NCB Combi Boiler I had a cinder block chimney going straight up through the middle of my house. Once the Navien was installed the venting simply went right out the side of the house. The chimney then became completely redundant and I was able to remove it freeing up 8 square feet per floor.

You can buy the unit and either install it yourself (We wouldn’t recommend this but maybe you know a licensed gas fitter and plumber).

Interested in a Navien NCB-240 Combi-boiler for your home?

We have professional installers and the “know how” needed to get the job done right.