This is a decision based solely upon your home, your needs, and your requirements.  Below you will find the positives of a tankless water heater as compared to a conventional power vent 50 gallon system.  There are valid arguments for both sides and in some situations a tankless may not be the best choice but in some a lot of situations it can be the best choice.

My goal here is to lay out all the points accurately and concisely so you are able to come to your own conclusion and feel comfortable with your decision. 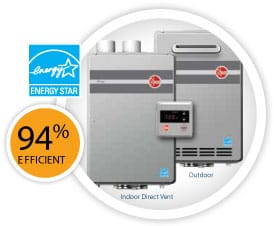 Yes, a tankless will cost more.  Tankless installers throughout the GTA and Ontario will charge about $2500 to $3500 for a tankless and full installation.  There are many factors that go into the installation cost, I recommend that you get a pre-inspection to ensure a tankless can be installed and get a written cost estimate that will accurate.  Quotes over the phone should scare you.  Installation is different at every home but could potential require new venting pipes, wall mounting, condensate drain, and gas lines, electrical socket, copper lines, or new pex pipe connections.

Installing a new power vent water heater is much easier as the venting is already there and it is really just a matter of plug and play.  That being said you’re looking at about a $1700 to $1800 expense for a new 50 gallon PV system with installation.

A direct vent or atmospheric vent gas water heater is cheaper than a PV system; you are lucky if that is the system installed in your home.  A replacement from a reputable company is roughly $1000 give or take a few hundred.

If you are running an electric water heater you have a few more choices.  First off, electricity is nearly 100% efficient so every penny you spend on heating water is actually spent on water heating.  This is a good thing because it also happens to be the most expensive way to heat water.  In Ontario when we factor all the costs into electricity an electric tank quickly becomes the most expensive method.  The good thing is that an electric water heater is probably the cheapest of all the systems; you can pick one up at Home Depot or Rona for $400.

I won’t go into the science of how it forms it’s just important to know that as water is heated the formation is exponentially accelerated.  It forms in all water heaters, tankless, power vent, electric; nothing is immune to the buildup.

Why is it bad?  The calcium and line will act as an insulator making your water heater work harder and expend more energy.  There are factors here; hard water really accelerates the formation whereas soft water slows it down significantly.  As a general rule of thumb you can average about 1.5 to 2 percent efficiency loss per year on any water heater.

eg. A tankless at 96% efficiency will drop to 94% after a year, 92% after two year and continues on down. The same effects can be applied to a conventional tank that starts life at around 60% efficiency and can be reduced to 40% in only 10 years of use.

Tankless manufactures have taken this issue into consideration with their system designs requiring yearly maintenance in the form of a tankless flush.  Thus, if you simply run vinegar though the internal heat exchangers and components you will return a tankless back to its initial efficiency rating.

Conventional tanks have a valve at the bottom of the tank (well most do) which can drain some of the calcium buildup but otherwise there is no way to clean it out.  A conventional tank is built for a lifespan of 10 to 12 years; disposable systems designed to simply be replaced.

A tankless has a lifespan estimated at roughly 20 or more years and this is mostly contributed to the ability to remove calcium buildups that normally choke up water heaters.

Space savings – you are paying hundreds of dollars per square foot of living space a tankless can free up 3-4 square feet as the whole system is hung on the wall.  House prices in Toronto and the GTA are though the roof, the space alone pays for a tankless.

Endless Hot Water – This is a blessing and curse… A lot of the savings a tankless provides can be eaten away pretty quickly if you take advantage of endless hot water in the shower.  We’re all guilty of spending a bit too much time in the shower one time or another.  That being said a study in 2011 by the Canadian Mortgage and Housing Corporation found that on average tankless owners experienced about a 5% increase in hot water use.

Endless hot water – Citing that same CMHC article and looking though some of the data revealed one family increased hot water use by 62%.  A conventional tank would run out of hot water before that could have happened.

Gas Savings – Gas prices are incredibly low prices here in Ontario, roughly 10 cents per meter cube in 2013.  The savings a tankless produces doesn’t really add up that fast with today’s rates.  For example, using the CMHC data set the average home used 1.42 cubic meters per day with a conventional tank.  After installing tankless systems the average home use was down to 0.79 cubic meters per day.  Working that out seems to save you roughly 7 cents a day. That’s a very long payback period… This is very simplified and artificially low as I’m not adding the Enbridge customer charge, deliver charge, transportation charge, and the PEF value charge that is all tacked on to our gas bills.

Here is the big question, does a tankless save you money? It’s still a tough one to answer.  The CMHC report shows that homeowners save on average 44% of their gas consumption for heating hot water with a tankless.  Natural gas prices are at historic low prices negating this benefit somewhat.  How long will gas prices remain this low? Who knows where they will be in 10 or 15 years.

A tankless still has a lifespan twice that of a conventional tank, factoring this into the cost makes a tankless system a great investment.  Again it’s a factor of time with the longer you own the system the greater you savings will be.

Tankless systems require maintenance to maintain efficiency; you can do it yourself or hire someone.  Either way the cost is more than negated by the efficiency maintained by your system.

For every dollar you spend on heating water with a tankless 98 cents are actually put towards heating your homes water, 2 pennies are sent up and out the exhaust.  On a conventional water heater you are sending a good 40 cents out the exhaust for every dollar spent.  Tankless on demand water heaters are at the top of the game, they can’t get any more efficient making them pretty much future proof.

We offer tankless quotes for free within Toronto, the GTA, and the Golden Horseshoe, if you are interested in finding out more simply sill out our form below or give us a call at (647) 925-1930