Tankless Manufactures – Who Owns Who 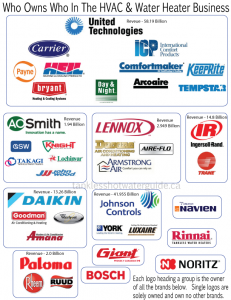 Determining who owns who in the water heater business is actually very convoluted.  So as a little exercise we decided to see if we could decipher who the biggest players were in the industry.

As you would expect in the heating and air conditioning sector there has been a lot of buying and selling.  In fact Daikin recent purchased Goodman for a few billion dollars pushing them right near the top of the heap.  United Technologies is the biggest player and owns the most brand names by far.

The interesting part is that it seems tankless water heater companies have yet to be bought out by some of the big name players.  Navien, Rinnai, and Noritz are all relatively small companies in comparison to the likes of United Technologies or Johnson Controls.

Looking at this data and I wouldn’t be surprised to see one of those companies bought out.  Daikin would be my thought for the most likely purchaser.  Having recently purchased Goodman they are obviously on the hunt.  Paloma owning Rheem and Ruud would probably be a great buy as well having both conventional water heaters as well as tankless water heaters.

Giant is a Canadian company and is now branching out into the tankless segment.  They have a new system we will be reviewing here soon and are also well positioned for a takeover bid (which I feel they do not want).

Ultimately the biggest companies that own nearly all of heating and air conditioning plants and brands are quite weak in the water heating business.  I wouldn’t be surprised to see one of them make a takeover bid on someone like Paloma, at which point the others will quickly be evaluated and possibly taken over as well.

There is a good chance that I have made some errors in both my assumptions and my chart of major HVAC companies and owners.  If you see any errors please send me a message or leave a comment and I will fix the issue.