In the past we had access to a thermal camera that cost several thousand dollars.  We thought it would be fun to take some pictures of a conventional hot water tank and really see where the system is losing energy and heat while comparing tankless.  Take a look at some of these pictures and see for yourself. 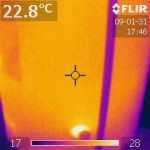 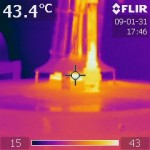 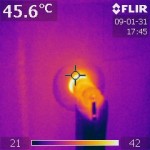 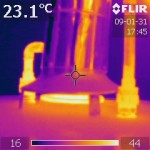 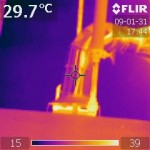 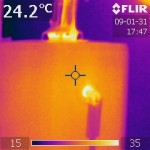 As you can see the body of a conventional doesn’t really release that much warmth.  It was only a few degrees warmer than the ambient air temperature.  The exhaust, water inlets, pressure relief valve, and hot water out port clearly showed the highest temperatures and heat loss.  Conventional tanks have a good layer of insulation between the internal tank and the outer shell that prevents a lot of heat escaping.  I would most interested in seeing the difference a hot water heater blanket provides as I feel it probably isn’t very much.

When comparing tankless systems it’s important to note that they actually have no insulation built into the unit.  The system fires only when you need hot water and thus there is no need to keep water hot constantly eliminating standby energy loss.  It is an effective concept that can reduce your water heating gas consumption by 44% (according to a recent study by CMHC).

If you are building a new home or purchasing one from a builder look at having a tankless installed or at the very least try comparing tankless systems to convetional.  The systems are a little more expensive but much easier to install during a new home build which can reduce costs.  Your homes resale value will increase having a professional installed tankless that effectively means you will recoup your investment if you decide to sell later on.

We install tankless systems for builders, home contractors, renovation companies, and home owners interested in upgrading their water heating systems.  Give us a call or fill out our form below for a free quote on upgrading to a tankless water heater.