It is important to understand the relationship of ground water temperature and the flow rates of tankless water heaters.  In Southern US States a tankless can produce substantially more hot water as the incoming water can be as warm as 75 degrees. The tankless system doesn’t have to work very hard to get the water up to 120 degrees (45 degree rise).  Here in Ontario it’s a different story, our winter water temperatures dip into the low 40 degree range, this puts additional pressure on the tankless and requires the system to produce more heat to achieve the large temperature increase (roughly a 78 degree increase).

Here in Toronto we recommend tankless systems that are on the larger end of the spectrum, these systems usually produce about 199,000 BTU.  This much energy allows the production of an adequate amount of water for most residential home demands from Toronto’s low winter water temperatures. 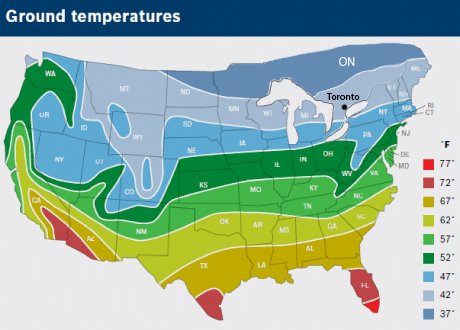 Although most tankless systems utilize very similar systems to heat water efficiently each tankless manufacturer has their own proprietary systems for heating the water.  The unique of each system has created minute differences in hot water production at certain temperature levels.  Though a lot of digging we have created a chart containing the most popular tankless systems and their respective hot water output at certain intervals.