Are you renting your water heater from Direct Energy? Well you may (will) want to call them before April 2st 2012.  Direct Energy has sneakily decided to change their rental contract so that they you are forced to pay a buyout fee of between 100 and 1000 bucks or more.  In a nut shell if you don’t cancel your contract now you’re locked in for life. 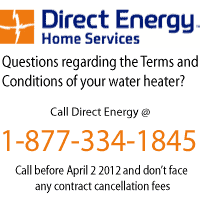 It’s crazy that everyone is renting their water heaters when owning one is much, much, much more cost effective and sensible.  A water heater rarely ever breaks down as they are simplistic and dependable.  Most US states and the rest of the provinces don’t rent their water heaters it is incredible strange that the rental big wigs have such a strangle hold of the Ontario market.

If you’re a Direct Energy customer you should receive a letter stating that they can choose to keep your old rental agreement but unless you call by April 2nd you are subject to the new contract rules.

Get out of your contract and buy a new water heater; they really are not that expensive.  You will own the system, it adds to your homes resale value, and you cut $20 a month off your bills.  As I mentioned before Ontario is unique in its tank rental situation, it’s time for us to move away from this crazy monthly payment and simply outright own your water heater.

We have developed a tank ownership installation partnership in response to these drastic Direct Energy contract changes and can offer you a pretty good deal.  This partnership aims to get you out of a monthly contract and into ownership and thus if you’re looking for a new rental this is not for you.

Of course this is site is more on the lines of tankless water heaters so if you’re thinking of making the switch to ownership maybe it’s time to jump up to a tankless system? These systems are over 95 percent efficient (regular tank is at best 55 percent) and produce unlimited hot water only when you need it.  They are smaller, have a much longer lifespan, but do cost more than a conventional tank thus a pre-inspection is essential to determine if a tankless can be installed. The choice is there.