Navien tankless has issued a recall on thousands of tankless systems that have pose a risk of leaking carbon monoxide and poisoning homeowners. 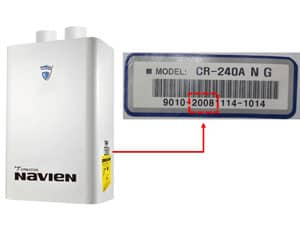 Navien is located in South Korea and has been manufacturing it’s tankless water heater for several years now. There are a suspected 13,000 units with the defect and recalled. An unstable connection can cause the vent collar to separate or disconnect allowing exhaust and carbon monoxide to leak into the home.

Tankless water heaters are a green appliance that is able to heat water instantly saving consumers money and energy. A tankless eliminates the need to have a standing storage hot water tank that needs to be heated continuously.

The affected Navien tankless systems that are being recalled were sold to distributors from February 2008 to March 2009. They have been described as:

These units are installed indoors in basements and closets (typically in Canada and the northern US). The units that are installed outside are not affected and not being recalled.

If you discover you have one of these models you can schedule a free repair but should not use the water heater in the mean time. Navien also suggests that a carbon monoxide detector be installed outside the sleeping areas of homes.