Giant microwaves to heat water instantly? Is this real? And can it actually work?

A microwave (like in a microwave oven) is generated by a magnetron at a frequency of 2.45 gigahertz, this is the

exact frequency that targets water molecules and gets them vibrating faster and faster, thus heating up.

The principal behind a microwave tankless water heater is basically the same as your microwave oven at home just on a larger scale. Cold water will simply pass through the unit where it will be bombarded by microwaves actively exciting the molecules to the required temperature. The warm or hot water will then pass through the plumbing system to the source of demand.

Effectively this is making hot water produced by electricity actually a reality. There are electric tankless water heaters, sure, but they require massive amounts of power and don’t reliably produce enough water to supply a modern home. Wanderport, a manufacturer of these systems is claiming upwards of 6-7 gallons per minute which is directly on par with conventional tankless systems. 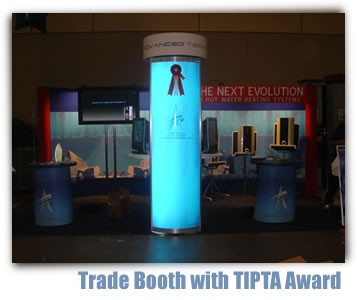 What’s potentially so great about these systems?

First off there is no venting needed, no holes in the walls, no venting proximity restrictions; these are huge barriers that gas or propane tankless systems face. On that same note, the conventional tankless systems sometimes require home owners to upgrade supply lines as units can consume upwards of 199,000 Btu’s.

Secondly a microwave unit has an efficiency of 99% and emits no pollution. The unit also doesn’t degrade over time as a conventional tankless does with calcium deposits and buildups in the various heat exchangers that they need.

So what’s the chances of you getting a microwave water heater in your home in the near future?

According to Wanderport, quite realistic. In fact they have a product on the verge of being released. Its already won an advanced technology award from the Toronto Construction Association.


It has now been more than 5 years since we wrote this article on the Wanderport Corporation and their microwave tankless system. In theory the idea was actually brilliant; unfortunately they were unable to come up with a product that could be mass produced. They appear to currently be in the energy drink business now, somewhat of a drastic change if you ask me.