Tankless water heaters come in two different efficiency ratings, condensing and non condensing (or min-efficiency and high-efficiency). A condensing unit will recover more than 85% of waisted heat that would normally be vented as exhaust.  This is accomplished through the use on an additional heat exchanger where incoming water is pre-warmed with the exhaust heat.

Navien or “Navian” makes a tankless system that is 98% efficient by employing the dual heat exchanger condensing system.  As mentioned above Navien uses the same method to reach its high efficiency by allowing the relatively warm exhaust gases to transfer otherwise wasted heat to the incoming water.  This tankless is effectively preheating incoming water before it flows through the primary heat exchanger. This adds about a 10 to 15 percent efficiency increase over a mid-efficient tankless water heater, which in itself is already at least 80% efficient.

There is an interesting thing that occurs to the exhaust when using a condensing tankless.  The temperatures are reduced so much that venting materials choices are expanded significantly.  This allows for cheaper and more flexible exhaust runs for condensing tankless systems.  Rinnai uses concentric venting for its non-condesning tankless systems which is made of stainless steel and can add enough to the installation price that it becomes more economical to upgrade to the Rinnai condesning tankless. 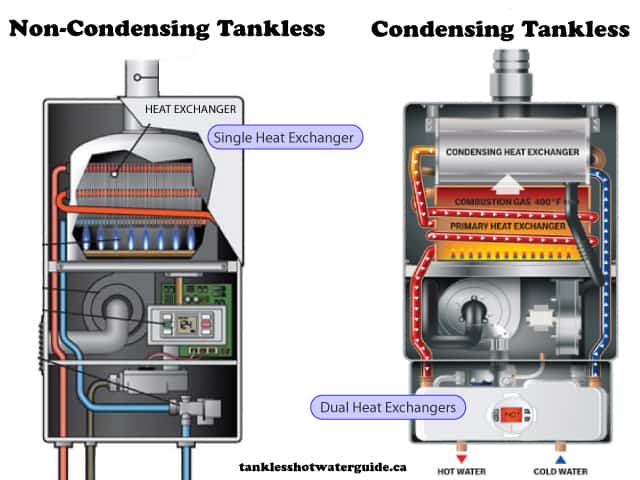 Fill out our form below and we will contact you within one business day with a quote or to schedule an free in home inspection to ensure a tankless can be installed.

RINNAI TANKLESS - We suggest holding off on your purchase at the current moment as prices are a little higher than usual.